Cártel Nueva Generación as an idea

Like Los Zetas before them, the CJNG are whatever you need them to be 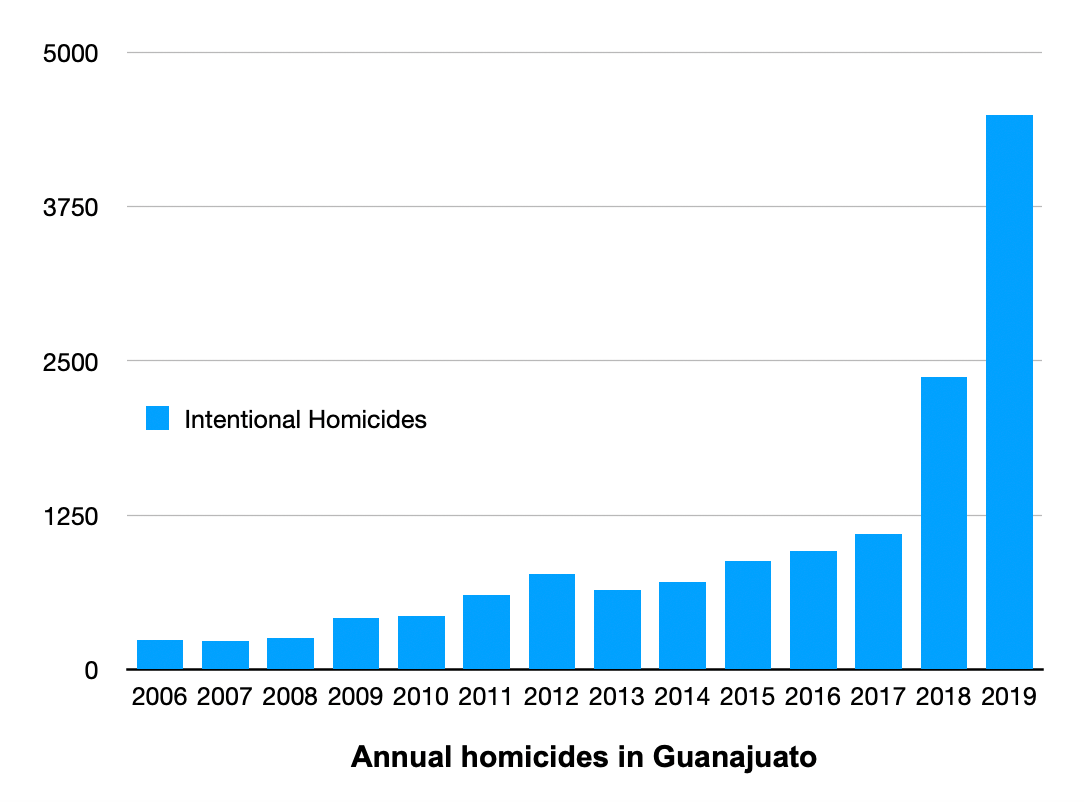 There was no immediate information on a possible motive in the attack, but it bore the signs of a drug gang killing.

Cártel Jalisco Nueva Generación (CJNG) are an idea. They're a phenomenology of violence at different scales attributable to criminal gangs, their rivals, covert actions by security forces and information operations complementary to counterinsurgency. CJNG are an unseen force which gives meaning and context to violence which might otherwise be inexplicable.

The CJNG rationalizes incomprehensible violence. When 11 people were shot to death by armed commandos in a case which will never truly be solved, that was the CJNG. When the number of annual homicides increased exponentially in Guanajuato after police reforms in September 2017 and the deployment of federal forces in January 2018, that was CJNG's war over territory and key smuggling routes to the US.

MEXICO CITY (AP) — Gunmen killed 11 people, including four women, early Sunday in a bar in the central Mexico state of Guanajuato. State prosecutors said the bullet-ridden bodies were found at a bar near the town of Jaral del Progreso. The area is near the border with Michoacán state, which has been a point of incursion for the Jalisco cartel, which wants to move into Guanajuato. Local media reported the four dead women may have been employed as dancers at the bar, located on the side of a highway. There was no immediate information on a possible motive in the attack, but it bore the signs of a drug gang killing. Guanajuato has been the most violent state in Mexico in recent years, but authorities had hoped the detention of a leader of a local gang on Aug. 2 would help stem the violence. The detained leader of the Santa Rosa de Lima gang, José Antonio Yépez Ortíz, was better known by his nickname “El Marro,” which means “The Sledgehammer.” He had long fought a bloody turf battle with the Jalisco cartel, and authorities blamed him for much of the violence in the industrial and farming state. While murders across the state dropped slightly to 339 in August from 403 in July, they may be rebounding in September as gang members fight to fill the vacuum left by Yépez Ortiz’s detention.

From the Associated Press

last edited 07:12:12 PM, 09/29/2020
Mailing list
Newswire
United States Mexico Central America South America Southeast Asia Film & Television Development Announcements
narco.news
About Contact Newswire Book list Academic Wiki Press Aggregate
All company, product and service names used in this website are for identification purposes only. All product names, logos, and brands are property of their respective owners. Use of these names, logos, and brands does not imply endorsement. We disclaims proprietary interest in the marks and names of others.
narco dot  news