A little over two months since his former boss was arrested, the presumed current leader of CSRL is apprehended in Celaya without drama. 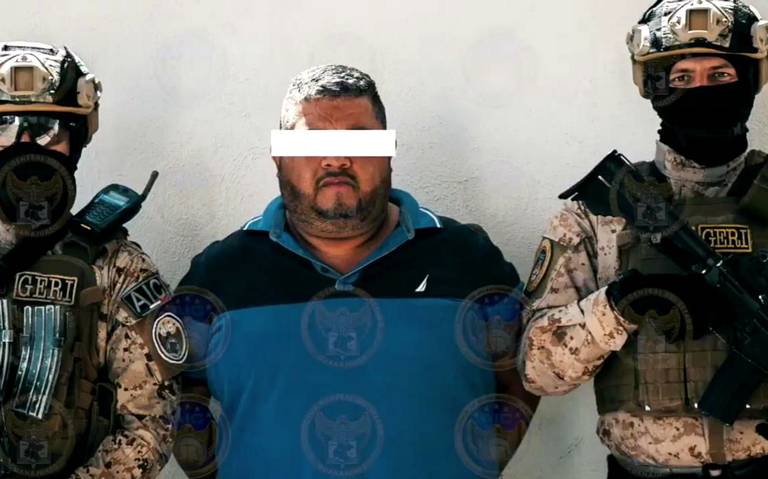 Wednesday night the governor of Guanajuato announced on social media that Adán Ochoa aka El Azul had been arrested in Celaya without problem. He was also known as El Gordo Paz (The Fat Fish), it is understood that his El Azul nom de guerre is more recent and a nod to the fact that the meth CSRL sells is dyed blue to differentiate it from the white stuff sold by CJNG. Historically CSRL as a criminal group has been focused on the theft of fuel. Though more recently evidence points partly to that being less of a focus with more attention going to the street level distribution of crystal meth. That isn't to claim that their pursuit against CJNG is solely over drugs. I'm more speaking on their focus as a criminal organization, regardless of what CJNG or other potential rivals are doing. The higher level of organization required to clandestinely and effectively tap oil pipelines seems less an expertise these days of CSRL.

It is not certain what triggered the apprehension of El Azul. He was arrested at a house and located with one other person. Whether they received recent intelligence of his where-about or if that was already known and they just decided it time to move in on him, we will probably never know. Discovered at the house were various weapons, some of them used exclusively by the military. In addition they managed to find some cardboards which I'd do anything in the world to get pictures of, but we aren't so lucky this time around.

One recent incident that might give us a hint as to why El Azul was scooped up so quickly. Last week this site published a story about a former Morena candidate in the state being kidnapped and dismembered, with his remains scattered across a highway holding up traffic. While this might seem like business as usual in the world of the narco, there were differences.

Instead of waiting to dispose of the body under the cloak of night, they decided to drop it right in the middle of a busy highway in the afternoon. That is not typically how these things happen, usually taking place in the middle of the night with the majority of the public not seeing it personally and only reading about it in the press. That wasn't the case here and seems safe to conclude that was because they wanted it seen by all. While targeting politicians is not uncommon, it's not something that CSRL has focused on. All together certainly a risky calculation by El Azul, one that might have ultimately cost him his freedom.

State officials did confirm to Milenio that he was sought in connection to the killing of Jesus Tinajero, the Morena politician. This gives us more indication that potentially it was that incident that made them ultimately take action. In the past the government has usually been quick to dismiss the victims killed in supposed organized crime incidents as being members of organized crime themselves. That line of defense is a lot less applicable when a dead politician shows up. Such incidences also have more of a likelihood of being covered on the national level which in turn would increase attention and pressure on the government of Guanajuato to act.

In addition there had been a lot of criticism following the arrest of El Marro that violence in Guanajuato hadn't subsided much at all. Such complaints are naive at best, but more so come off as ignorant these days. Since the start of the so called drug war, numerous top dogs have been apprehended. Each apprehension has produced almost the same result and that is that nothing changes. So to think that arresting El Marro was going to genuinely have any impact on the violence in Guanajuato is just delusional at this point.

The publication El Sol del Bajio writes that following the arrest of El Marro up until the arrest of El Azul, a total of 761 homicides took place in the state, "most of them related to the dispute" between CSRL and CJNG. In August they start on the 16th, being that was when the first cardboard donning the name El Azul showed up following the apprehension of El Marro.  During that period in August, a total of 213 homicides occurred. September seeing a total of 378 homicides, with the first half of October up until he was arrested on the 14th totaling 180 homicides.

Among the criminal acts attributed to him is the multi-homicide at the night center "La cabaña del toro" in Jaral del Progreso, as well as the murder of five people during a wake in the same municipality. The murder of former Morena's candidate, Jesús Tinajero, is also attributed to him. He was left dismembered on the Jerécuaro-Apaseo el Alto highway along with another body, both of which were found with a piece of cardboard signed by the criminal group that operates in the Laja-Bajío region. [DeepL]

El Azul made the mistake of quickly and publicly taking the helm of CSRL after El Marro was arrested. Authorities had some clue as to who the man was, in their possession the picture seen below obtained by Milenio shows the two vacationing in Mazatlán sometime during 2017. Though information on leadership roles within the group might not have been well known, the picture showed the two were close. It is said that El Azul was in charge of the logistics of the group, such as maintaining the warehouses where stolen goods were kept and resold, as well as being aware of the pipeline taping activities the group took part in. It is not certain how he became the next in charge, at the time there was chatter that the father of El Marro would take over.

As I have said in the past and will say again, simply decapitating a criminal group doesn't make that group go away. Many times it even makes things worse, a brief example being the last two months in Guanajuato. With CSRL though things are a bit different and this very well could handicap the group going forward. For one CSRL is not a very large group to begin with. Compared to the video from a couple years ago of them announcing their existence featuring a couple dozen guys, the two video messages released following the arrest of El Marro contained at most a dozen. This for a group that is supposed to or at least has aspirations of controlling the entire state.

They've also always thrived with a central figure leading the way. In addition to signing their cardboards with the group acronyms, they've always included the name of the man in charge. Quickly after the arrest of El Marro, the cardboard messages beginning on August 16 it was made known to the public that El Azul would take over. His name first showing up as El Comandante Azul and later as just El Azul. The cardboards the last couple weeks covered in lots of As, presumably a nod to him. The point being, without such a leader it is uncertain how morale remains high for the group. The transition from old to new last time was too smooth. I'm not very confident that'll happen again with such grace. If they are to announce a new leader, I'd expect them to do it soon like last time. Though they might try to continue carrying the mantle in the name of their imprisoned leaders. Which could be a smart play, not giving the authorities any one obvious person to pursue next.

Such groups that show more loyalty to the leader as oppose to the brand put themselves in a position more susceptible to disorganization after the apprehension of the leader. It also gives us a hint at how they operate, that is in a more vertical fashion as oppose to horizontal. Taking down CSRL becomes a lot easier when you're able to form a hierarchical structure of them. Compare this to how arrests in the state of those with CJNG have been. It's an assortment of people spread out in criminal cells of various sizes which makes it more difficult to completely dismantle and more like a game of whack-a-mole.

This gives CJNG a significant advantage in Guanajuato. As CSRL gets its leadership picked off one by one. CJNG on the other hand just keeps loosing small cells, that are probably for the most part made up of mercs. Meaning you can replace those criminal cells for as long as you've got the money to do so, and we know CJNG has plenty of money. Univision reports that 970 members of CSRL and 833 members of CJNG have been arrested from 2018 to August of this year. Obviously these numbers need to be viewed with some skepticism. We don't know what their criteria is for including someone as being a member of a group, but it give us a rough idea. I can't imagine that CSRL can withstand loosing another 900+ members and still exist. Like I said, the group is a lot smaller than it is made out to be by the media. Though I think it's safe saying that CJNG could easily loose another 800+ members because they'll just hire more.

The question is often asked, "Does this mean CJNG will take over?" It needs to be said that no group can take over because no group has taken anything over to begin with. At most what happens is drugs sold in Guanajuato simply come solely from CJNG as oppose to both groups. Though no single group is likely to ever earn full market share. Politicians once paid off or extorting members of CSRL now simply just switch to the same dance with members of CJNG. But what I think is more important is the loss of identity, messages posted to social media with the words "Guanajuato for Guanajuato" hint to this. They're similar to messages seen in Michoacán, another state currently facing encroachment from those associated with CJNG.

The months ahead appear to be bleak for CSRL. To survive, they will in many ways have to start recruiting more people but that seems difficult. After having their two leaders thrown in jail in a matter of months, I'd imagine people would be more hesitant to join the cause. Money can make the recruiting process more fluid but it's hard to say CSRL at the moment is bringing in much money. The more profitable theft of fuel appears to be less a focus of the group these days. With more attention going to selling crystal meth, slightly evident by the fact The Fat Fish more recently was being called The Blue. Selling that is, directly to consumers, it's not like they were making big bucks selling wholesale. They probably aren't even producing the stuff themselves, but have to buy it from CDS or the like. Returning to the theft of fuel might be difficult, a sophisticated operation to pull off, presumably requiring the help and active involvement of the groups leadership. That from a group whose latest two leaders are now sitting in jail seems unlikely.

Overall CSRL was naive to think that their crusade against CJNG would be welcomed by the state government. Something I'm sure they've observed happen in other states who have backed the home team crime group against the Jalisco folk in the past. But with governments around the country eager for ways to show competence in an environment with ever rising homicide numbers, such back room bargains don't appear guaranteed as before. That is unless you've got the money, something CSRL has few but CJNG plenty. The illusion is that taking over is done by strength, when in reality it is done with money and corruption.