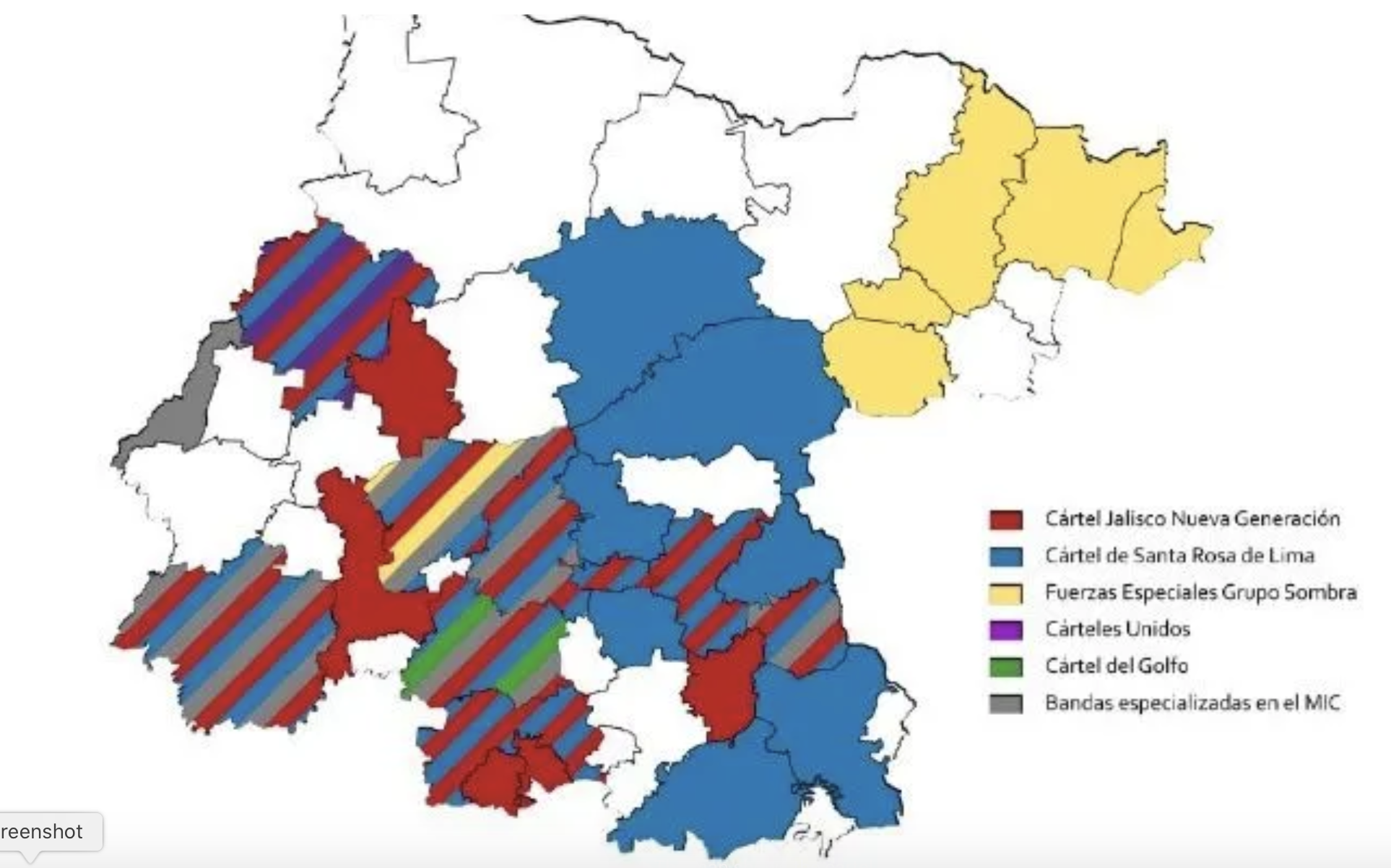 Criminological deterrence theory concerns the capacity of the state to modulate human behavior in order to prevent crime and violence by administering justice and upholding the rule of law. In Mexico, the state has historically been considered as lacking deterrence power. A large majority of homicides remain unsolved and many criminal groups operate with seeming impunity.

These conditions are considered part of the reason for the phenomenon of violent criminal insurgent groups like Cártel de Santa Rosa de Lima (CSRL), La Familia Michoacana (LFM) and Cártel del Noreste (CDN), who persist in states like Guanajuato, Michoacán and Tamaulipas, respectively. These groups thrive in conditions created by weak or nonexistent state institutions and survive by blending in with the civilian population and relying on a network of protection from officials.

In Guanajuato, the state and federal governments have focused efforts to remove CSRL through targeted enforcement actions against financial operators and important associates of the criminal group. In March 2019, state and federal forces began a coordinated operation to remove CSRL from power in the state's industrial corridor. Progress was frustratingly slow and attempts to capture the group's leader, El Marro, were unsuccessful until recently.

Working in tandem to the operation to remove Marro was a simultaneous campaign by Cártel Jalisco Nueva Generación (CJNG) Grupo Élite (GE), supposedly to expand their territorial control in Guanajuato. GE first appeared in late 2018, but since the summer of 2019 came to be known primarily as the standard-bearers of CJNG in expertly produced propaganda videos showcasing the group's strength, discipline and organization. In fact, a majority of the CJNG's current reputation seems to be based on the communications of GE. Video communications from the group have included interrogations of captives and messages delivered by impeccably dressed and heavily armed members standing in formation. Images of GE have become the standard depiction of the Mexican cartel writ large in the international media.

Overall, GE has remarkable instincts for shaping the public's perception of the group. In addition to their awareness of brand image, communications and actions by the group have a seemingly expert precision and focus to them. Whereas most videos produced by criminal groups tend to be made opportunistically, every video from GE seems to be made with a particular objective in mind. Whether it's to announce their presence ahead of time in a particular area, or to intimidate particular groups, every video from GE communicates a very specific message.

Criminal violence in Guanajuato has been among the worst in the country for the last several years and is attributed to a territorial dispute between CJNG and CSRL. The reality is more complex with a number of different regional actors with overlapping territory that puts them in direct competition with each other. The two primary drivers of the violence in Guanajuato are said to be CJNG and CSRL.

The state's task is monumentally challenging and complex. The state must eliminate the primary causes of violence in the region while preventing second order effects like the empowerment of another threat group. If they take out CSRL, CJNG would just take their place. If they take take out CJNG, CSRL would be empowered. If they take out both CJNG and CSRL, then another group would probably fill the vacuum. Or so the story goes.

Instead, the state must clear the principal drivers of the violence while retaining the coercive and deterrent power of those criminal groups in some applications to prevent outside groups from capitalizing on the opportunity to move in and set up shop. The same conditions which enabled the original occupants to persist take time to remediate. Marro may be gone, but there are still corrupt officials which will take time and possibly coercive force by GE to eliminate. No easy or perfect solutions exist. This is basic counterinsurgency (COIN) doctrine.

The ultimate goal of COIN is to address the conditions which enabled the insurgent group to come into existence in the first place. This is complex work which takes years or even generations to achieve. If CSRL is cleared from Guanajuato, the state still has to hold the reclaimed territory while doing the painstaking work of building the state's institutions, improving economic opportunities, and administering security, justice and social services.

So, how do you transition from the conditions which enable phenomena like CSRL, LFM and CDN to exist into a functional state? Maybe an imperfect solution is a criminal group which you have total control of. One that will never fragment and who doesn't terrorize the population. Maybe you could even dismantle it from the top and middle down without ever signaling what you were really up to. Maybe you could be the hero and the villain.

Or maybe neither heroes or villains actually exist. Maybe there's just violence used against anyone resisting the state's will and a narrative to explain the dirty business of building a state through force.

last edited 06:59:05 PM, 10/08/2020
Mailing list
Newswire
United States Mexico Central America South America Southeast Asia Film & Television Development Announcements
narco.news
About Contact Newswire Book list Academic Wiki Press Aggregate
All company, product and service names used in this website are for identification purposes only. All product names, logos, and brands are property of their respective owners. Use of these names, logos, and brands does not imply endorsement. We disclaims proprietary interest in the marks and names of others.
narco dot  news