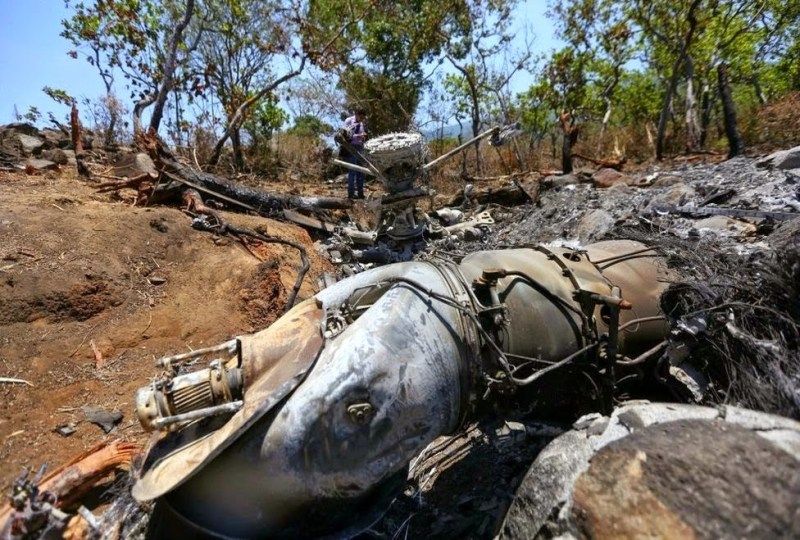 They have accumulated several decades of experience in their fight against the forces of the State and are now dedicated to passing along that knowledge. They are the Colombian guerrillas of the FARC. And according to US intelligence sources, the Jalisco-based drug traffickers—the Jalisco New Generation Cartel and Los Cuinis, who also have the economic capacity to acquire cutting edge weapons—received training in the jungles of Colombia. The proof that they were good students was the downing of a military helicopter on the first day of this month [May 1, 2015] in Villa Purificación

The demolition of a helicopter belonging to the Special Forces Airborne Group last Friday, May 1st, in Jalisco was not a stroke of luck for the hitmen, nor can it be automatically attributed to a possible lack of preparation by the military; The attack was perfectly coordinated and carried out by the Jalisco Nueva Generación Cartel (CJNG) thanks, according to US federal agencies, to the training that the Revolutionary Armed Forces of Colombia (FARC) have given them.

The CJNG and Los Cuinis, US intelligence sources say, have hit men trained by the FARC specifically to counter the military attacks.

"Our intelligence systems in Colombia detected for several months that some members of the Mexican drug trafficking had received training in that country by the FARC,"  a senior official from one of the US intelligence agencies told Proceso.

"The reports we obtained in Colombia indicate that group leaders (hitmen) and several leaders of the command ranks of the Cartel Jalisco Nueva Generación and Los Cuinis were trained by the FARC in military assault tactics," adds the source, who agreed to speak on condition of anonymity for himself and the federal agency where he works.

"There are several intelligence reports that have recorded the training of elements of Mexican drug trafficking by the FARC," explains an official from another US intelligence agency and who also requests anonymity for himself and for the federal agency at which he lends his services.

“It is a sensitive national security issue; for this reason, when our intelligence systems detected this, we immediately communicated it to the Mexican government,” he says.

Neither of the two agents consulted has elements to say how many hitmen from the CJNG or Los Cuinis have been trained by the FARC in paramilitary tactics and guerrilla warfare. However, they assure that there are not many.

“Some dozen. No more than 50 individuals, perhaps”, says one of the two sources, who were interviewed separately.

When consulted on the matter, high-level Mexican government sources pointed out that "all investigative leads on this criminal group" are being thoroughly investigated.

According to the thesis of the United States intelligence agencies dedicated to fighting transnational mafias, in that narco-insurgent relationship, the CJNG and Los Cuinis hitmen have taken advantage of their trips to Colombia to "secure" the purchase of cocaine that they received, provided by the FARC, and they stay for several weeks in the guerrilla camps to receive training in order to repel attacks by the armed forces.

The world, their market

According to the United States Drug Enforcement Administration (DEA), Los Cuinis are the richest Mexican drug trafficking group in the world, and together with the CJNG “they are the almost absolute owners of the European and Asian drug market”, especially regarding the importation of Colombian cocaine (Proceso 2006).

The DEA maintains that Abigael González Valencia, El Cuini (detained on February 28 in Puerto Vallarta), and her brother-in-law, Nemesio Oseguera Cárdenas, El Mencho—leaders of Los Cuinis and the CJNG, respectively—have developed a strategy of cooperation with drug traffickers and narco-guerrillas from Colombia.

El Cuini and El Mencho established solid relationships with Colombian drug traffickers and the FARC, all of this according to the DEA, to buy cocaine from them and sell it in Europe, Africa and Asia, belittling the United States market due to competition with other Mexican cartels and to avoid the constant confiscation of cargoes. This made them the most profitable and resourceful drug trafficking mafias in the world.

For almost a decade, Los Cuinis and the CJNG allowed other cartels, such as those of Sinaloa, the Gulf, Juárez, Tijuana, Los Zetas, La Familia Michoacana and Los Caballeros Templarios, to dispute the drug market in the United States while they—in collaboration with the drug traffickers and the Colombian guerrillas—with little competition, took over the European, Asian and African markets without difficulty.

The two officials of the United States intelligence agencies interviewed by this correspondent agree: "Although the type of relationship between the FARC and the Mexican cartels is worrying," the issue of training should not be overstated.

“The FARC is not a truly successful group in insurgent tactics. They have been decimated for several years, so the drug traffickers whom they have trained could not be classified as highly dangerous in confrontation techniques against the Army or Navy of Mexico," says one of the two interviewees.

The two officials consulted refuse to state categorically whether what happened in Jalisco on Friday, May 1st is the result of the FARC's training of the CJNG and Los Cuinis. "They have enough money to buy any kind of weapons," says one of them.

And he adds: "It is very clear that they know how to use this weapon, which surely arrived in Mexico from the United States, Europe or Asia and which they brought into the country via Central America, thanks to their relations with drug traffickers and guerrilla groups in Colombia."

The other official notes: "What happened [on Friday, May 1st] in Jalisco will force the Mexican Army and the Navy to modify their tactics for confronting this criminal group. They have to fight them with more sophisticated and effective weapons".

Faced with the resounding failure of that day—according to US intelligence agencies—the Army and Navy gave their elite counternarcotics special forces units the green light to use the military equipment recently purchased from the United States.

Between April 2014 and last March, the government of Enrique Peña Nieto spent more than 1.3 billion dollars on military equipment sold by the Pentagon (Proceso 2004).

After the downing of its Cougar helicopter, registration number 1009, an event in which there were 18 casualties, the Ministry of National Defense (Sedena) sent several of the UH-60M Black Hawk helicopters to Jalisco, equipped with 40T700-GE-701D engines and high-powered automatic weapons, class 36 M134, 7.62mm caliber, which are part of this recently acquired package.

The intelligence agencies of the United States maintain that because of the destructive attack of the CJNG and Los Cuinis, the Sedena also deployed several dozen multipurpose ground unit vehicles of the M1152 class, from the lot of 3,355 that the Pentagon recently handed over to the Peña Nieto government.

"The Mexican military must be very well prepared and armed to confront the CJNG, because these criminals have already shown that they can do significant damage with their combat strategies," underlines one of the officials interviewed, who has extensive knowledge of the subject.

Most of the elite Army and Navy counternarcotics forces have been trained by the Pentagon at several of its bases in the United States.

The relationship between the Colombian guerrilla and Mexican drug trafficking is not new. In November 2013, the DEA's Special Operations Division's Counter-Narcoterrorism Operations Center (CNOC) delivered a confidential report to the U.S. Congress detailing the ties between the FARC and the Sinaloa Cartel.

Although the special investigation does not mention any FARC training plan for the Sinaloa Cartel in paramilitary tactics, it does suggest the existence of a strategic relationship between the criminal group led by Ismael "El Mayo" Zambada and Colombian narcos to take over the European, Asian and African markets (in competition with Los Cuinis and the CJNG).

The CNOC's findings indicate that the Sinaloa Cartel and its Colombian partners, including the FARC, sell cocaine and other drugs to terrorist groups that have diversified their criminal activities to obtain more profits.

Following the reports collected in Colombia by the Obama administration on the FARC's training of Los Cuinis and the CJNG, the intelligence agencies prepared a confidential report that was shared by Washington with the Peña Nieto government.

The two officials interviewed claim to be unaware of the final wording of that document. However, they affirm that as part of the exchange of intelligence information between the two countries, the recently shared information was not considered an alert or warning.

“They are concrete reports that explain the information collected by our intelligence agencies and nothing more. The government of Mexico is responsible for acting accordingly if it considers that the information is relevant for the preservation of its national security or for the benefit of its fight against drug trafficking and organized crime”, concluded one of the anonymous intelligence officials.

(Report published in the Issue #2011 Proceso magazine, already in circulation)